Mississippi Stud is a five-card poker game, where the players compete against the table, rather than the dealer. While playing Mississippi Stud, players can bet up to 10 units on a single hand, with the ultimate aim of getting a hand with a pair of jacks or better.

You also have access to additional side bets that could exponentially catapult your winnings! 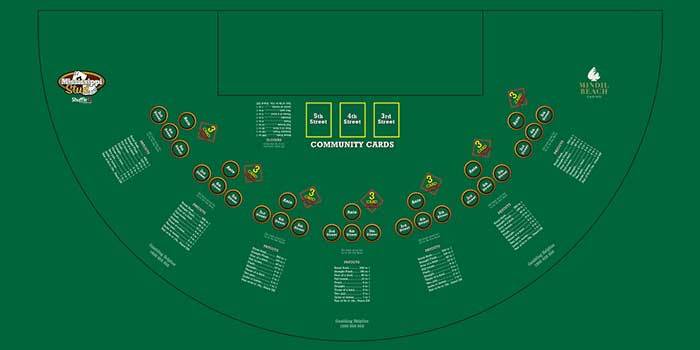 Ante - The initial wager that commences the game

Community Cards - Each hand, the Dealer deals the shared cards face up at the center of the table, and every player at the poker table use those same community cards.

3rd Street - The betting area for the first betting round

Fold - To fold is to discard one's hand and forfeit interest in the current pot. Players lose all previously wagered chips except for the 3-card bonus

Royal Flush - A Royal Flush consists of the Ace, King, Queen, Jack and Ten of the same suit

Four of a Kind - Four of a Kind, also known as quads, is a hand that contains four cards of one rank and one card of another rank.

Flush - A Flush is a hand that contains five cards all of the same suit, not all of sequential rank

Three of a Kind - Three of a Kind, also known as trips or a set, is a hand that contains three cards of one rank and two other odd cards

Jacks or Better - A single pair of jacks, Queens, Kings or Aces and three odd cards

Pair of 6s or 10s - A single pair of sixes, sevens, eights nines or tens plus three odd cards.

*Maximum payouts will be displayed on a notice at the table.

*Maximum payouts will be displayed on a notice at the table.